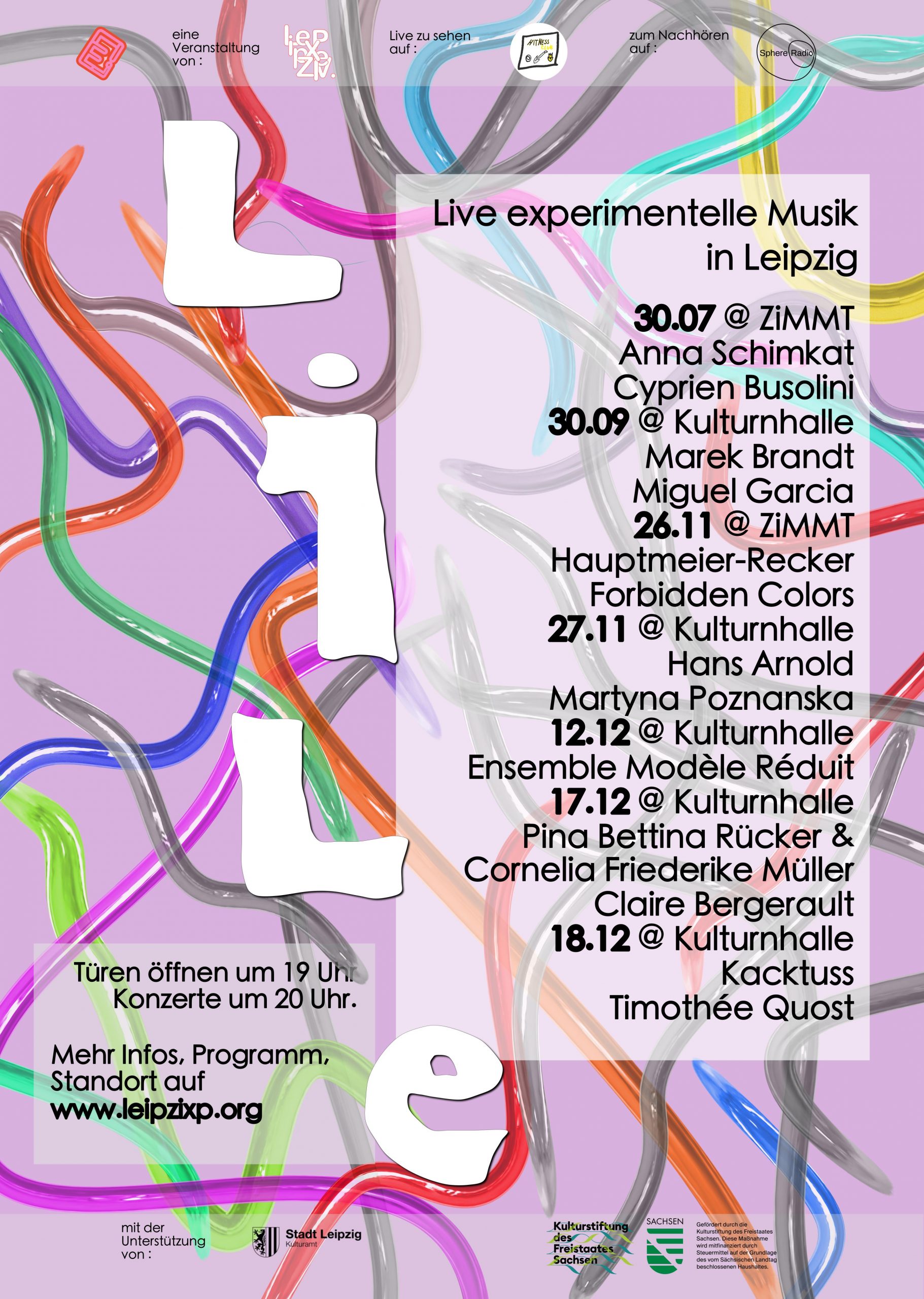 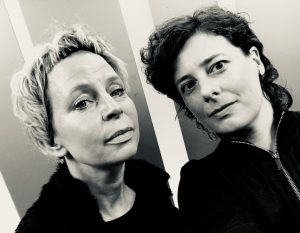 CFM works with field recordings and uses them in samples, loops and soundscapes edited from them. The sounds of water have always played a major role, whether as drops as in the installation The Drop and the composition Poolloop or as waves and rain for stage music. With the percussionist Gerd Schenker, she set flowing water and rain to music in the piece Fluency. The manipulated sound of a drop, the time and space in which it falls, gives the impression of its own fluidity.

Pina Rücker’s quartz sound bowls were originally made to grow layers of silicon crystals, which are used in the semiconductor industry to make chips. Due to their industrial context, they are sounding „melting pots for the digital future“ and therefore offer themselves as musical melting pots for the forms of time known to us: historical time, future time and space-time, which are fused in the present time of listening. No analogue instrument has the ability to fill the space physically and so powerfully with bell-like layers of sound. In the concert, Pina Rücker will work with a 17th-century English madrigal whose text invokes ’spring floods of one’s own tears‘ to drown in.

For SiH2O, CFM and Pina Rücker will meet in an improvisation in which the sound aspects of water and silicon are explored, giving rise to a new composition.

The ensemble has its origin in the ZiXP 2019 festival and currently has 12 members from Leipzig and Halle. 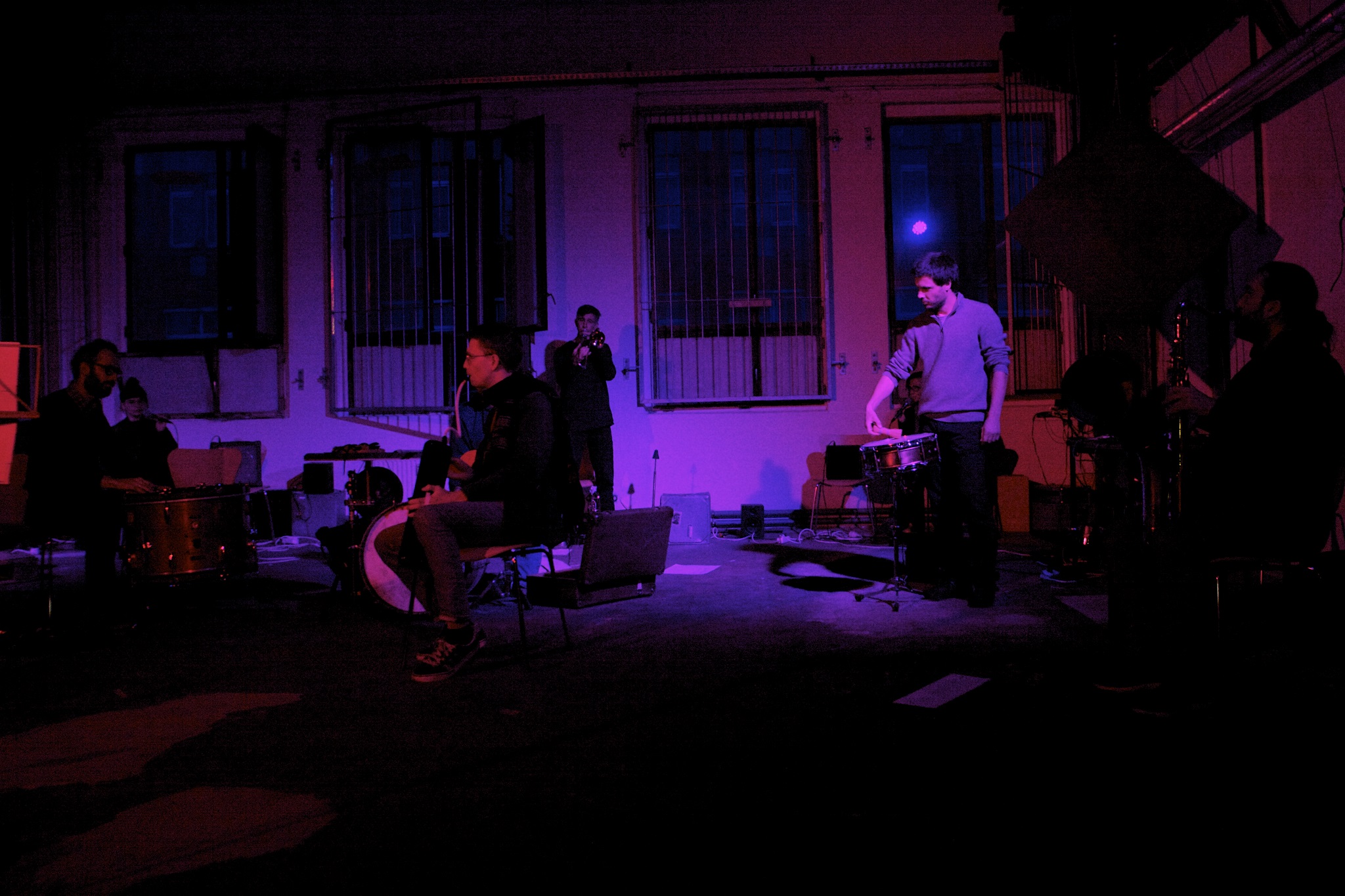 Part of its identity – still in definition – is its diverse instrumentation: a mix of acoustic and electro-acoustic instruments, with wind instruments, percussion, singing bowls, voice or electronics. Another key element is the diversity of its members‘ musical experience: Jazz, techno, new music, free improvisation, composition, theatre directing, classical music, ambient, etc. All of them also have a long experience with improvisation, strong individuality and their own projects in which they can express their own voice. 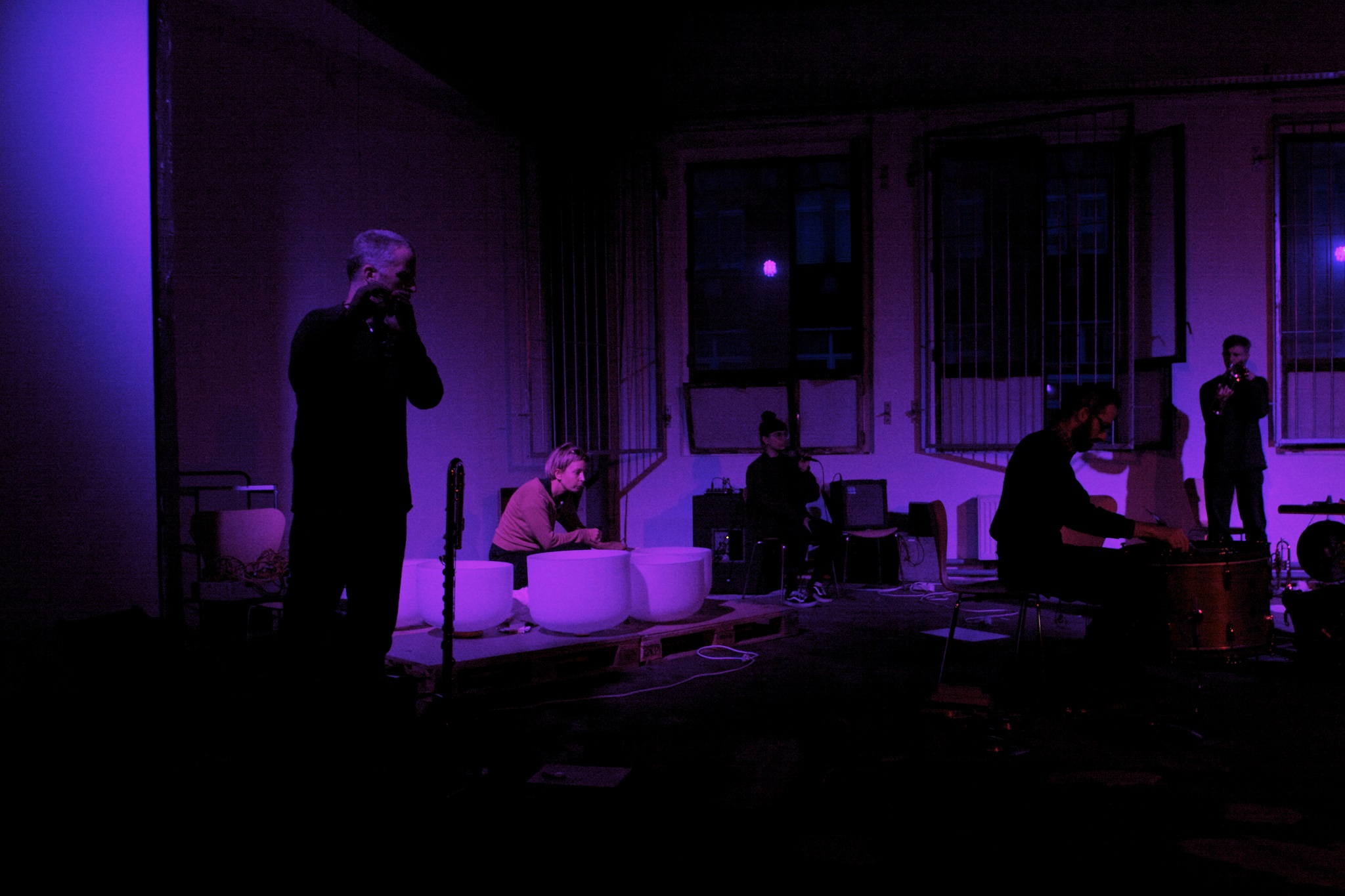 The ensemble engages itself with nondeterministic music: we want to play music in which the decision of the musicians are important and strongly influence the result. We want to establish a dialogue in practice between improvisation and composition and are interested in working with works that set a defined framework in which one can move freely.

The Ensemble is supported by Musikfonds with its FEB Grant in the frame of the Neustart/Kultur initiative and will be in residence from September to November to develop its language and repertoire.

For LiLe, it will work specifically (but not necessarily exclusively) with works from composer Christian Wolff. 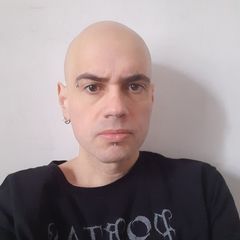 Miguel A. García, also known as Xedh, is a basque artist who works on the field of experimental music and sound art. Trained in Fine Arts, he works on electroacoustic composition and improvisation, using sources obtained from the manipulation of electrical devices, sometimes mixing these with sounds of acoustic instruments and field recordings. Both solo and in different groups, he has performed extensively in Europe, America and Asia.

He has collaborated with many artists, both in studio and live, such as, among others: Alfredo Costa Monteiro, Ilia Belorukov, Sebastien Branche, Francisco López, Francisco Meirino, Seijiro Murayama or Jean-Luc Guionnet. His work appears in more than a hundred albums with labels such as Bestiarie, Crónica Electrónica, Cyclic Law, In Solace Publishing, Intonema, Malignant, Mikroton, Moving Furniture, Pure Reactive, Sentient Ruin, Slaughter Recs, etc.
At the same time, he works as event organizer and curator, and he is the founder of the extinct Le Larraskito Club, the director of the Zarata Fest (strange/unusual music festival) and part of the organization of the Hotsetan cycle in Azkuna Zentroa in Bilbao, all of them platforms for the dissemination of different, odd and risky music and related disciplines.

The act of singing is a tale of emptiness and plentitude. Within the body there are resonant spaces, spaces which we sound out so that they may become rooms or cathedrals. It is a complex act which summons a whole alchemy of flux, a convergence and divergence of spaces, experienced through the prism of tensions and filters. I activate these filters when I enter into that particular sonic speleology which is the intra: intra-cranial, intra-larynx, infra-bass, and sub-equivalencies of frequencies using additions and subtractions from these layers of sound, a sort of mix of the organic.
To sing is also to dig deep into the inexpressible infra, a sort of introspection brought out into the light and experienced in a specific context, that of the temporality and acoustics of the site. It is the site which dictates the music, a subterranean cry which emerges from the shadows and moves through matter and space.

Starting his musical studies on the viola with classical repertoire, Cyprien Busolini moved on towards a new music territory after the Conservatory, as he dedicated himself to contemporary music and improvisation since then.

As an improviser, he searches for new directions in his own music playing. He mostly focuses on sound, spaces and silences, directions that he also explores now in solo compositions of his own.
He is currently a member of Dedalus ensemble and Onceim (an improvising orchestra based in Paris).
Marek Brandt

Behind experimental channels such as the tape label Tortellini Records („Not looking for perfection“), her DJ sets and her activity as an organizer, the name KACKTUSS has stood in Leipzig for three years: In this project, Katharina Gerhardt arranges and produces semi-analog ambient/drone soundscapes that are based on the modulation of tapes and never allow themselves to be constricted in their sound noise. 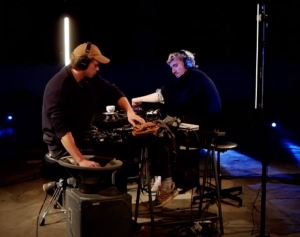 Martin Recker and Paul Hauptmeier studied composition at the Hochschule für Musik FRANZ LISZT Weimar. Already since 2009 they have been working as an artist duo under the name „Hauptmeier | Recker“ in the fields of composition, sound and multimedia art. In addition to works for theater and opera, live electronics, radio and electroacoustic music, their common focus is on sound installations in public spaces. They are co-founders of ZiMMT – Center for Immersive Media Art, Music and Technology – in Leipzig.
Hauptmeier|Recker create virtual sound worlds that playfully explore the concept of a natural listening experience. The use of a multi-channel speaker dome with the possibilities of immersion and movement of sound is further explored through the use of 13-channel impulse responses recorded by Hauptmeier-Recker at various locations. These impulse responses are mapped onto the surface of the dome, expanding the domain of spatial experience. Techniques of mimicking natural sounds and sound structures enhance synesthetic listening. The sounds are created through the use of analog sound synthesis tools such as a no-input mixer, life sampling of acoustic sound sources, and digital multi-channel processing and synthesis in Max-Msp. 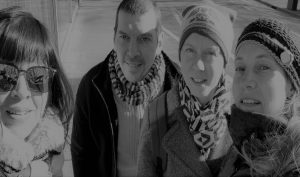 Hans Arnold is a composer and musician in the fields of experimental and improvised music. 2011-2016 he studied percussion with Etienne Nillesen at the „Hogeschool voor de kunsten Arnhem“ (NL) and lives since 2016 as a freelance musician and independent piano builder in Leipzig. He is leader, composer and drummer of the band Holzig, drummer of the experimental math rock band H.C.Behrendtsen, the indietronica band Elephants on tape, as well as in various projects in the field of jazz, avant-garde and improvised music. His solo project is dedicated to both song-like and sound exploratory structures. The focus is on the prepared bass drum, subtly enhanced by electronics, which, in addition to its percussive role, also functions as a resonating body that complements and alienates the sound of other percussive objects, makes harmonics sound or generates a broad noise spectrum.

Martyna Poznańska is an interdisciplinary artist practicing active listening and field recording in tangent to working with visual tools such as video, installation, her own body, drawing, and listening workshops or soundwalks.

Responding to the climate crises related issues, she has been exploring the symbiotic relations between human and non-human beings. She has exhibited and performed internationally at the Akademie der Künste, Berlin (DE), Aperto Raum Berlin, Konsumverein Braunschweig (DE). She has worked with artists such as Hans Peter Kuhn (ÜBERGANG Martin-Gropius- Bau Museum), and Peter Cusack (There Will Be No Other Forest). In 2013 she received a grant from the Polish Ministry of Culture, and in 2018 scholarship from the City of Berlin.
Martyna completed a Magister degree in Spanish Philology a JU, Krakow, (PL), studied Sound Art at the UAL, London. In 2016 she obtained an MFA in Sound Studies at the UdK Berlin.

Forbidden Colour -Entre nous- series for Lile Leipzig, reflects baroque playing styles from an experimental point of view.The starting point for the ensemble is the baroque form „Ritornello“. The musicians identify various phenomena associated with baroque music and baroque instruments, such as timbre, dynamics, form or ornamentation, which they take out of their usual con

text and reinterpret based on their experiences in contemporary improvised music. They thus create spaces that are at once familiar and still foreign to us. In this way, they can present something new to the listeners, as well as encounter themselves and each other anew in the constantly evolving but also unchanging musical space. With the help of simple forms and elements, an exchange of countless ideas becomes possible. Risks are consciously taken, the musical journey goes deep towards a border between the familiar and the unfamiliar, and perhaps beyond. 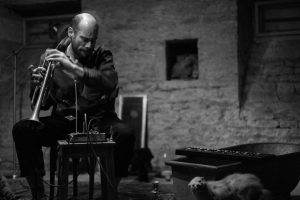 walking along the borders of different musical practices.

After an apprenticeship as a wood sculptor at the „Fachschule für das Holz- und Ivbeinverarbeitende Handwerk“, Michelstadt i. Odw., Anna Schimkat studied fine arts at the Bauhaus University in Weimar until 2004. In 2011, she completed her master’s degree at the „Hochschule für bildende Künste“ in the class for sculpture and architecture-related media in Dresden.

Schimkat has lived in Leipzig since 2006. As a visual artist, Anna Schimkat develops her works on the border between sculpture and sound. Whether as performance or installation, viewed in the respective context, she investigates the processes, causes and regularities of natural, social and culturally created reality. The question of how we make experiences in the first place, and how we sharpen our consciousness for these experiences, is one that she poses to herself in her works, but also to the viewer. In particular, she is interested in the conscious perception of sound spaces, which she works on in a multidisciplinary approach. The found sound of things and surroundings is inspiration and basis. It is her material from which she playfully explores and follows the respective concept, filtering out the sound, whirring, noise, clacking, plugging, crashing, humming – the specific sound, the specific form.

The ZiMMT – Center for Immersive Media, Music and Technology – is a hub for art, science and technology. In direct exchange about innovations in the field of immersive media technologies, developers, creative users and interested members of the public can come here together to test and experience the latest developments in the domain. You can currently follow current events around the initiative on Instagram and soon also on www.zimmt.net.

Please note: entrance only for members of the ZiMMT e.V.. Free registration available before the concerts. 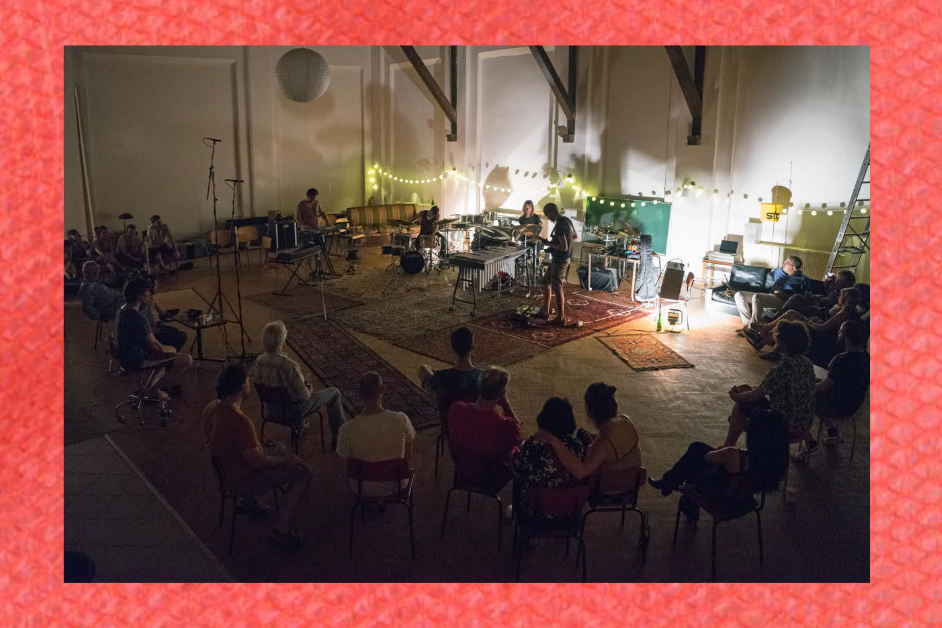 The old sport hall was turned into the „Kulturnhalle“, a place to meet and for various cultural events.

Among other things, the location has dedicated itself to intimate and special concerts. It is characterized by good acoustics and a unique atmosphere.

There is no stage in the conventional sense, but a holistic spatial concept that puts the musicians in direct contact with the audience.